First in a series about the Maine Windjammer Association’s captains, we start with the oldest windjammer in America owned by a young captains and their family. The Schooner Lewis R. French was built in Christmas Cove, Maine in 1871, and is poised to celebrate her 150th birthday in 2021. Owners Garth Wells and Jenny Tobin are dedicated harbingers of her history and maritime legacy. Here’s their story.

Captain Garth Wells grew up sailing Beetle Cats on Cape Cod.  He credits his love of sailing to his grandparents, who lived aboard a 30-foot sailboat and regularly took him cruising.  After receiving a degree in business, Garth worked aboard several schooners in the Chesapeake Bay, including the Kathryn M. Lee, the country’s last schooner to commercially dredge for oysters under sail.  He eventually found his way back to New England and aboard the Lewis R. French, where he worked as mate for five seasons. He spent winters honing his carpentry skills aboard many of the schooners in the Maine Windjammer fleet.  Finally in January 2004, Garth purchased the Lewis R. French, earning him the distinction of becoming the youngest windjammer captain in the fleet at the helm of the oldest schooner in the country. This year marks his 16th anniversary in business.

Jenny Tobin grew up in Skokie, Illinois, and spent her summers sailing small vessels on the Great Lakes. After college, she started working on larger traditional vessels, and those sails took her to South America, and up and down the East and West Coasts of the U 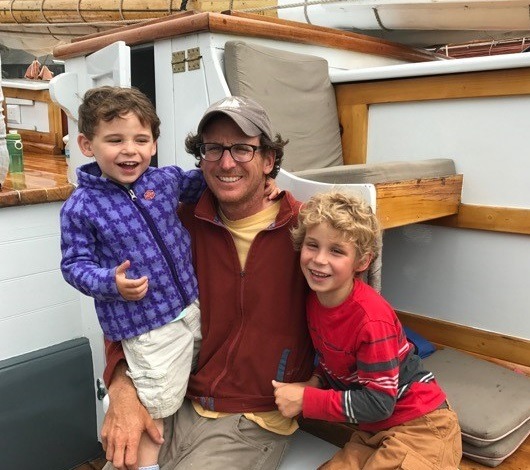 .S. Jenny and Garth met when she took the first mate’s position on another Camden windjammer. After many years of dating, they got married in 2007.

Now, Jenny sails as much as she can, but also stays ashore to man the Lewis R. French Global Headquarters, answering phones and paying the bills—and taking care of their young sons, August and Sanden, both of whom love to be on board the Lewis R. French as often as they can.

Garth and Jenny’s enthusiasm for windjamming is contagious and they look forward to getting their guests actively involved in the experience of sailing an authentic 19th century schooner.  One of the things Garth loves most about windjamming in Maine is the freedom from itineraries.  Says Wells, “With so many places to go—all of them beautiful—you don’t need to focus the whole day on getting to one place.  You can enjoy every day on the water knowing there’ll be a choice of cozy anchorages each night.”

Since 1871, the Lewis R. French has freighted cargoes such as lumber, firewood, bricks, granite, fish, lime, people and even Christmas trees.  The Lewis R. French was brought into passenger service in 1976  after her third major rebuild.  She was renewed from keel to topmasts and is made of native white pine and red oak.  The Lewis R. French is 101 feet overall, 65 feet on deck, 19 feet of beam, and draws 7.5 feet of water with a full keel.  She is a great sailor and has won the coaster class of the Great Schooner Race many times. 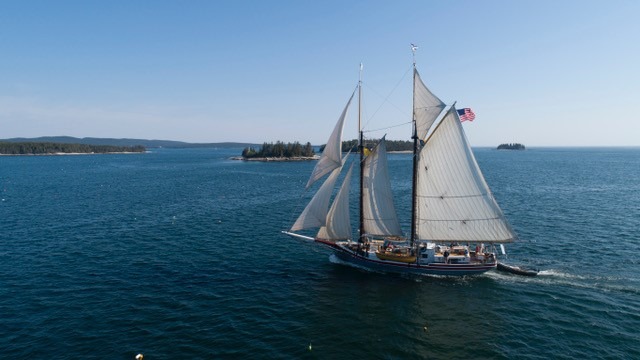 Learn about all the boats in the Maine Windjammer Association fleet by visiting their websites.