Get a jump on summer with a June cruise: There’s still availability

Is there a sailor in your soul? Discover the adventure, fun, friendship, and pure bliss a windjammer vacation can bring.

While Memorial Day may signal the start of the summer vacation season, ask any of the Maine Windjammer Association captains, and they’ll tell you it’s also the start of the sailing season! Either way, June is almost upon us and that means the launch of the 2019 Maine Windjammer Association cruise season too.  Whether you call it summer vacation season or cruise season, it’s the perfect time to get away for some amazing sailing on the Maine coast.

The Maine Windjammer Association captains have told us over and over again that June is their favorite time to sail.  Everything is new and sparkling on the boats and enthusiasm is high.  The days are longer in June than any other time in the sailing season, allowing more time to explore harbors, islands and coastal towns.

We’ll let you in on a little secret:  June Is also one of the least expensive times of the year to cruise.  Whether it’s Father’s Day cruises on Heritage when the minimum children’s age is relaxed to ten and fares for Dads are discounted or June shakedown cruises.  Fares are at their lowest at the very beginning of the year and later in the year too.

The Maine Windjammer Association’s Annual Gam kicks off the season with a wonderful raft up, grog toast to the season and then a musical jam with captains, crew and guests.  There’s still some availability for the Gam cruise on Ladona, Victory Chimes and Heritage, so it’s not too late to get your annual gam in!

How about a June lighthouse cruise on the Mary Day or Lewis R. French? It’s not too late to book these cruises during the third week in June, which coincide with the summer solstice.  Have the camera ready as you capture two Maine icons – windjammers and lighthouses in the same frame!

Both American Eagle and the Heritage venture outside Penobscot Bay during the last week in June for the Friends of Boothbay Windjammer Days Festival.  Participate in the parade of sail and take part in the festivities throughout Boothbay on this trip.

And speaking of American Eagle, there’s still availability on their Spring Into Summer cruise, June 19-22.  Take advantage of lower prices for this cruise, which also celebrates the longest sailing day of the year.  Or close out June with a berth on American Eagle during the Great Schooner Race Week, leaving June 30th through July 6th.  Celebrate both July 4th and the 43rd Annual Great Schooner Race where you get to be a part of the largest collection of windjammers racing across Penobscot Bay.

For solo travelers, the Windjammer Angelique has a special offer on their June 23-26th cruise.  The “solo sailor special” means that if you’re traveling alone and wish to book a private cabin, there is no single surcharge on the 3-night cruise June 23-26 only. It’s Sunday through Wednesday for $750 per person, but only available for that June 23-26th cruise.

The Victory Chimes has added a music element to all of its June cruises!  Enjoy live musical entertainment on board for about an hour or so, and then spend time exploring islands, participating in sailing and enjoying fine food.  There’s availability on all the June cruises. 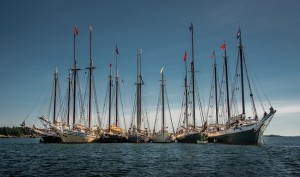 Here’s a quick view cruises that still have availability for June as of June 24th.  Please note that availability changes all the time, so book these June cruises soon before space is no longer available!