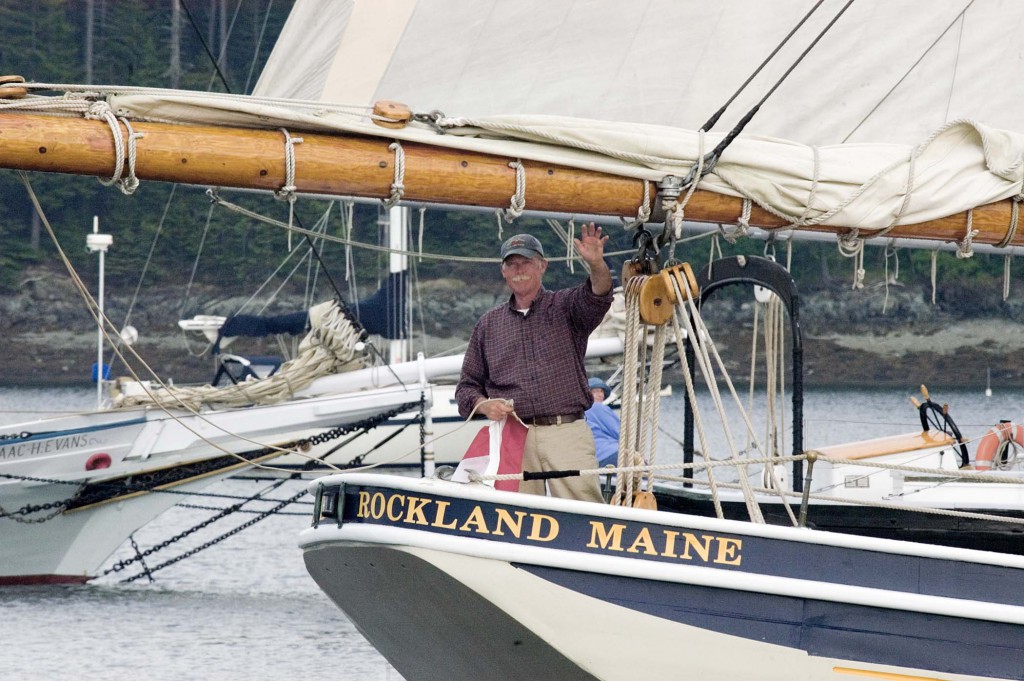 How appropriate that Captain John Foss, owner of the Schooner American Eagle, would have a family legacy in Maine dating back to 1638 when his forebears first came to the pine tree to build a sawmill at Great Falls.  Named after his great uncle killed at Little Round Top during Battle of Gettysburg, he’s always been a man of many grins. That affable easy going, kind and brilliant approach he’s had since he was a boy – not to mention his interest in maritime history – is still present today as the master of the schooner American Eagle.

Captain Foss grew up on the water in South Freeport, Maine. Always fascinated by boats, he worked at the local boatyard during breaks at Bowdoin College where he competed on the sailing team. After graduation John spent a summer sailing as deckhand and sometimes mate on the schooner Adventure out of Camden. He was sworn into the Coast Guard in Rockland, rowing ashore from the schooner in a dory.

John served as a deck officer on weather cutters, visiting such far away ports as New Orleans and Cuba in the summer and Newfoundland in the winter. 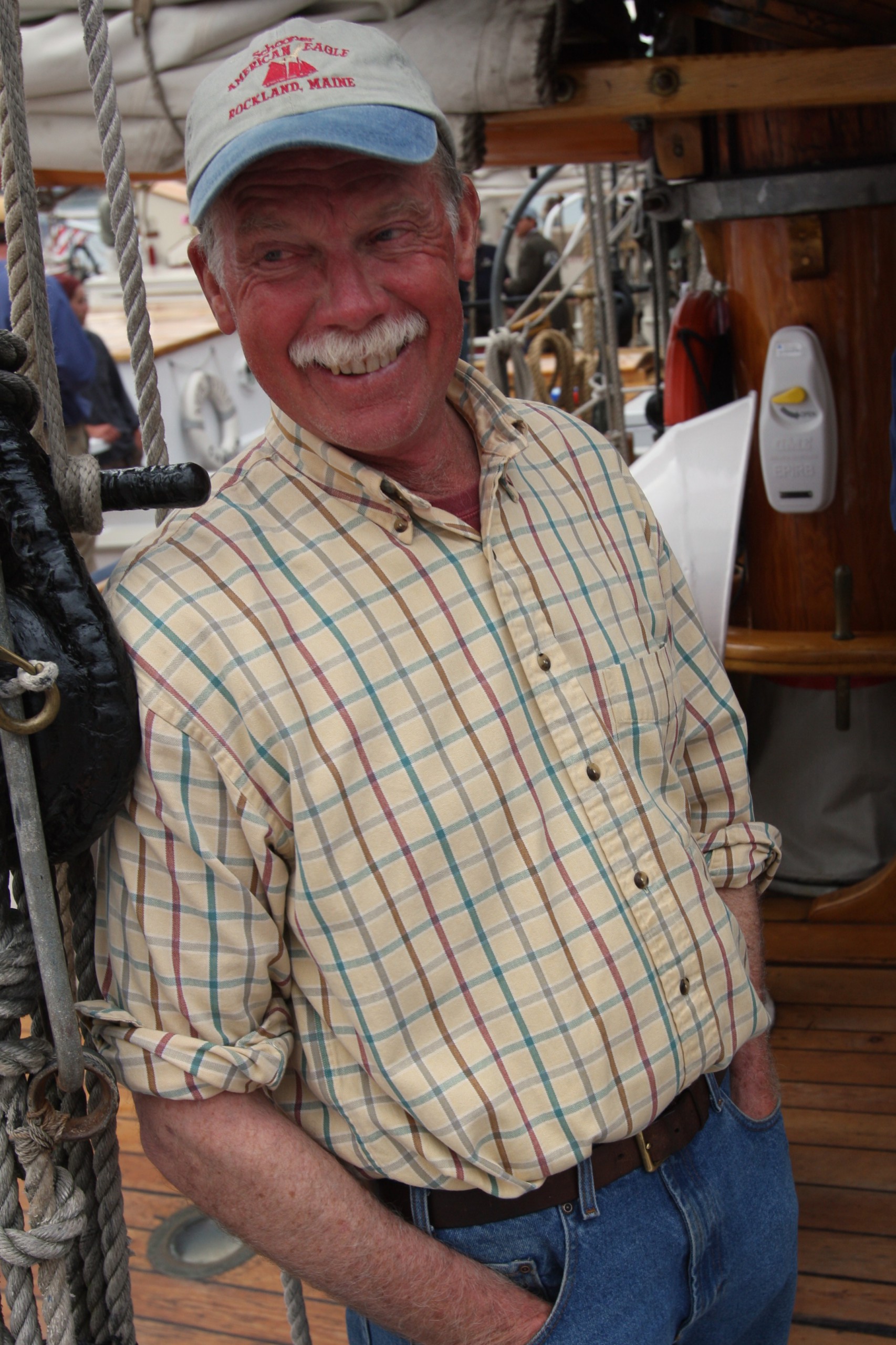 Always fascinated by historic preservation and maritime history, John’s career as a windjammer captain started in 1973, when he found the Lewis R. French, the last Maine-built schooner from the 19th century. Over the better part of the next three years Captain John rebuilt and restored the Lewis R. French, removing the gear and rig, replacing frames, planking, and decking, building new masts, and recommissioning the windjammer from a coasting vessel to a passenger-carrying windjammer for sailing trips along the Maine coast.

As if one rebuilding project wasn’t enough, during this time John joined forces with friends and fellow windjammer captains, Doug and Linda Lee (now owners and captains of the Schooner Heritage) to create the North End Shipyard on Rockland Harbor. Together, the team restored the marine railway that local windjammers still use annually for spring hauling and inspection. The French was the first vessel hauled out for rebuilding at the North End Shipyard. Through her rebuilding process in partnership with Doug and Linda Lee, the French once again became a working sailing vessel, last homeported in Rockland in the 1890’s.

After ten seasons operating sailing trips on Penobscot Bay aboard the Lewis R. French, the lure of restoration kept John on the lookout for new projects.  In 1984, Captain John bought the American Eagle, the last fishing schooner built in Gloucester, MA. Pretty much down at the heels after 53 years of hard work, the American Eagle made it to the North End Shipyard and over the next two years, John joined forces with five other schooner captains to completely restore her.  Three weeks into her first season the American Eagle participated in “A Salute to Liberty” in New York Harbor.  In 1991 she was named a National Historic Landmark. 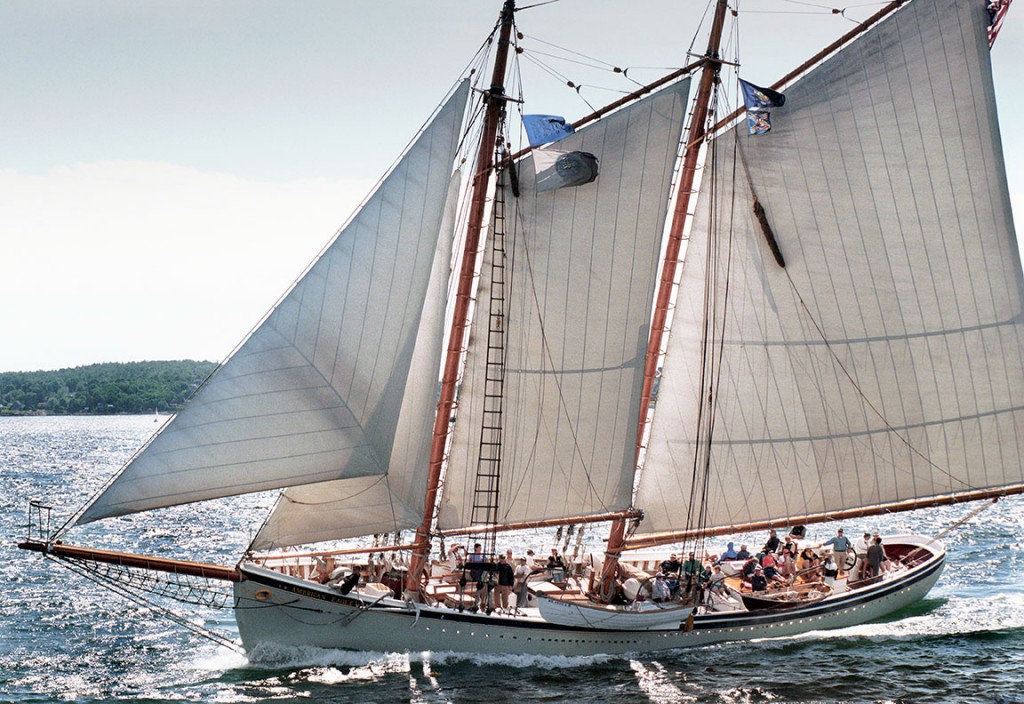 The American Eagle has the look and feel of an historic schooner with plenty of modern comforts and amenities. Her fair lines, solid timber and tarred rigging are as they were ninety years ago when she first sailed in New England waters. One of the things Captain John loves most about being a windjammer captain is providing a sense of place for a new group of guests each trip throughout the season, and this vessel tells the story well. He has made longer adventures to Nova Scotia, New Brunswick, Mystic Seaport, and Tall Ship Festivals in New York, Boston, and Portland.

When asked about wha

t he loves best about a season of sailing, Captain John says, “ the interesting guests, the hardworking skilled crew, the terrific vessel, the unparalleled Coast of Maine: all reasons to get out of town and see the coast from the right side. The level of cooking on board has always been surprisingly good without being pretentious too.”

Since 1987 the American Eagle has returned to Gloucester with crew and guests to participate in the Gloucester Schooner Race, a tradition going back to the 19th century and do some whale watching along the sea road home.  She has won the Esperanto Cup a dozen times. Sadly, the pandemic resulted in the races being cancelled and the American Eagle’s season being cancelled this year.   In a newsletter sent on June 22, John told his guests, “There’s another sailing season in me, and the 2021 schedule is in print and on the American Eagle’s website. Next year’s schedule is very close to the one we had for 2020: same cabins, same prices, same great cruising grounds, same captain, and even more cleaning. By next season we’ll have a better idea of guidelines and hope there will be a vaccine and clear, sensible, and workable guidelines to protect everyone.” 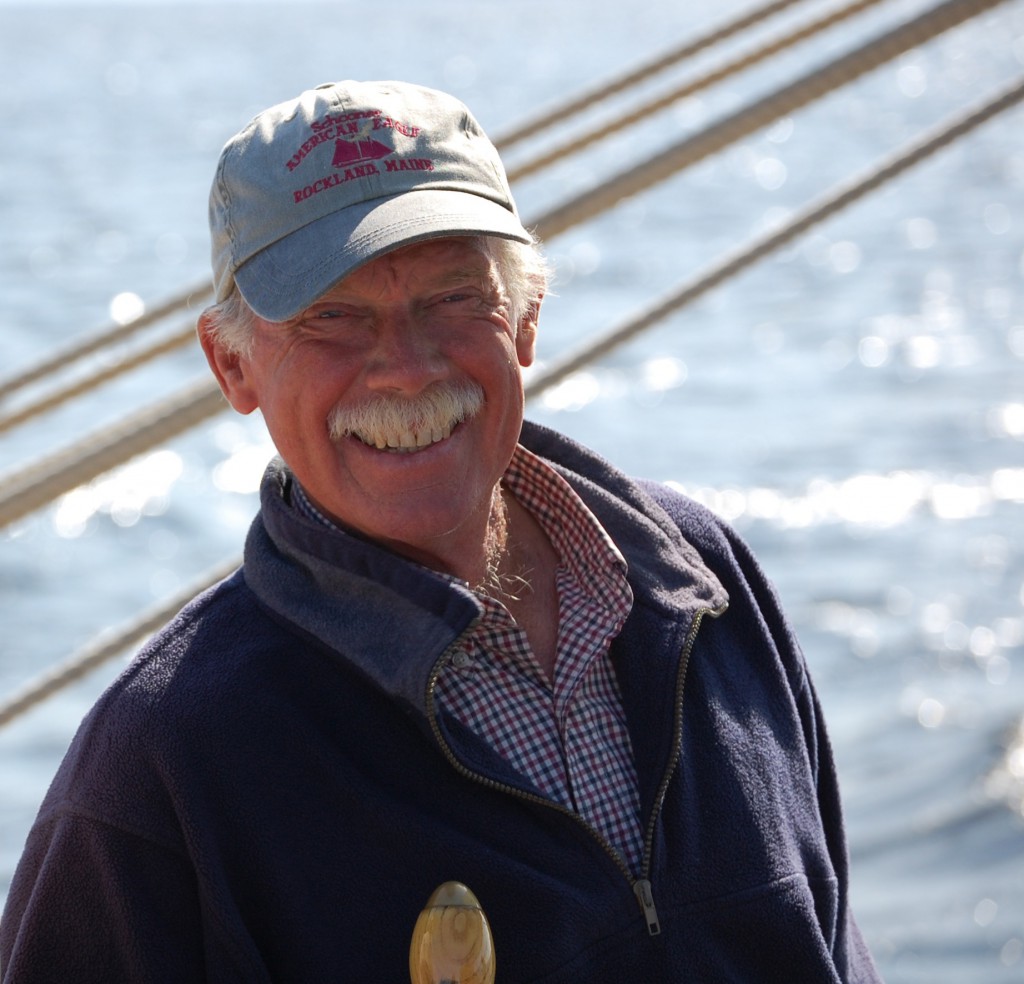 You may be able to take a sailing season away from a schooner, but you can never take his skilled eye for care and conversation away from this captain. John is spending the summer at the North End Shipyard, keeping an eye on American Eagle, and getting out on the water a little. He is helping build a barn at home this summer, where he describes his role as “the clean-up crew”.  “First summer ashore since 1975,” he says.  “It’s too hot on land; should be out sailing, enjoying the ocean’s natural air-conditioning.

To learn more about sailing on board the American Eagle and for 2021 schedules and rates, be sure to visit https://www.schooneramericaneagle.com.

Photo credits from top to bottom: